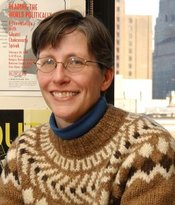 On Thursday the 10th of March, Dr. Jyl J. Josephson, Associate Professor of Political Science and Women’s and Gender Studies at Rutgers University, will give a public talk titled “Obama’s Fatherhood Initiative: New Fathers or Neopatriarchy?” The talk will take place in Askja, room 132, at 12-13pm.

President Obama has made a point of marking Father’s Day with discussions of policies related to fathers and families, including, in 2010, a proposed Fatherhood Initiative. These programs are an update and continuation of programs initiated in the Clinton Administration and given a conservative and heteropatriarchal form by the Bush Administration. Feminists and poverty advocates were deeply critical of the “Responsible Fatherhood” program of the Bush Administration, seeing it as ineffective, gendered, poorly targeted, and paternalistic.

This talk addresses both the symbolic and substantive aspects of Obama’s Fatherhood Initiative. In particular, what are the political dividends for Obama of his symbolic association with and visible promotion of this policy, and what is the subtext, in terms of race, class, and gender, of this messaging? Substantively, are the shifts that Obama’s administration proposes enough to create a fatherhood policy that feminists should support? What are the broader lessons of this very politicized policy?

Dr. Jyl J. Josephson is Associate Professor of Political Science and Women’s and Gender Studies at Rutgers, the State University of New Jersey, Newark campus. She is currently at the University of Iceland as a Fulbright lecturing scholar, affiliated with the Center for Women’s and Gender Research (RIKK), and teaching a course on the politics of sexuality. She has written on gender, sexuality, and public policy, primarily in the context of U.S. social policy. She has published books on child support policy, and on gender and American politics. Her work has also been published in journals such as Women and Politics, Journal of Poverty, Politics and Gender, and Perspectives on Politics.