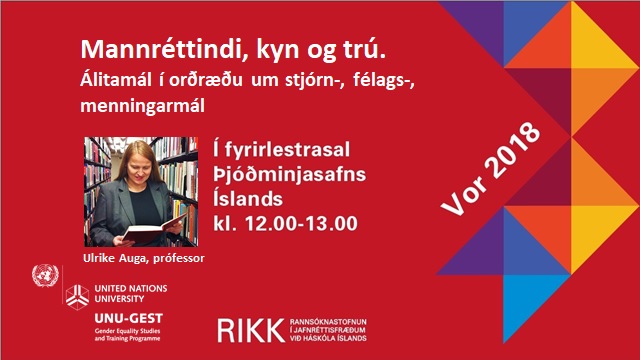 Dr Ulrike Auga, Professor in Gender Studies, is the second lecturer in the 2018 RIKK – Institute for Gender, Equality and Difference & UNU-GEST – United Nations University Gender Equality Studies and Training Programme – lecture series during spring term 2018. Her lecture is titled: “Human Rights, Gender and Religion. Controversies in Political, Social, Cultural and Sexuality Discourses”, and will take place on Thursday, 25th of January, from 12.00-13.00, in the National Museum’s lecture hall.

She is the Vice-President of the International Association for the Study of Religion and Gender.

Human Rights are often understood as the epitome of ethical good politics. Even this starting point is controversial: it is asked whether human rights are really useful to all, which presupposes their determination as a universal norm. The tension is particularly visible in the human rights handling of “gender”, “sexuality” and “religion”. This is evident, for example, in the debate on the (complete) veiling of Muslim women. With reference to human rights, it is argued that there is a ban because the disguise violates the rights of women. On the other hand, a ban is rejected because it contradicts the supposedly universal right to freedom of religion. There is often a connection between religion and violence in contemporary debates. The evaluation of the role of religion in the public sphere has changed fundamentally in recent years in large parts of the more secularized world. Religion was formerly considered a private matter but has a political significance for all people in the diversified society. Especially in the anti-colonial context, the importance of the category religion for gender research is emphasized. The secular-liberal principles of resistance are being revised and agency, as well as human flourishing, are also found beyond Western beliefs about freedom and good life, e.g. in the practice of spirituality.

The RIKK & UNU-GEST lecture series in the spring semester 2017 is held in collaboration with The National Museum of Iceland.

The lecture is in English, open to everyone and admission is free.