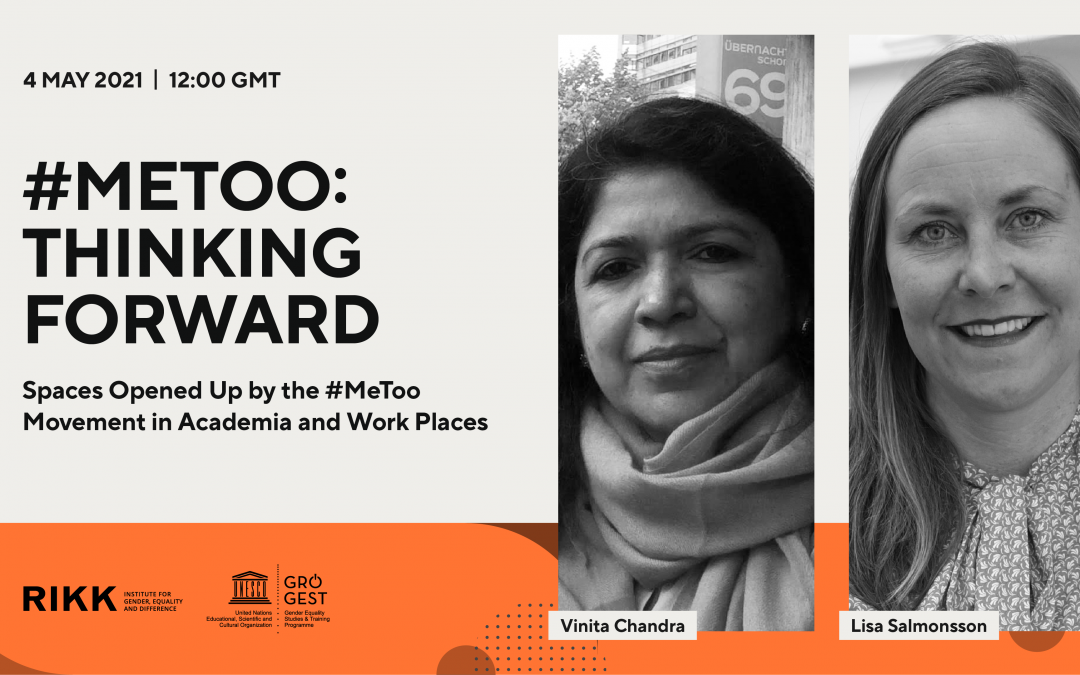 In the sixth event in RIKK and GEST’s conversation series Vinita Chandra and Lisa Salmonsson discuss the spaces opened up by the #MeToo movement in academia and work places. Vinita Chandra is an Associate Professor in the Department of English at Ramjas College
at Delhi University, India. She is a founding member of the Gender Forum, Chairperson of the Sexual Harassment Complaints Committee, and the Presiding Officer of the Internal Complaints Committee for Sexual Harassment at the College. Lisa Salmonsson is Senior Lecturer at Örebro University, Sweden. Her research interests include the sociology of work and the sociology of migration, the Swedish #MeToo Movement, labour market integration, segregation, skilled immigration, and unaccompanied youth.

The MeToo movement which started in 2017 was an online movement, spreading over almost the entire globe through social media, enabling the sexually harassed and abused to sit within their homes with their keyboards as their only weapons. Vinita Chandra will discuss how less than three years later, as academic engagement and other work moved online due to the pandemic, and the workplace became the keyboard, the space opened up by the movement became crucial to fighting gender-based violence in a time that physical gatherings were forbidden.

#MeToo activism in Sweden is highly organized because women in different occupations and fields came together and shaped private groups on social media platforms where they could talk about their experiences of sexual harassment. This way of organizing shifted the focus from individual testimonies and created a grand narrative about sexual harassment. #Akademiuppropet was one of over 65 different #MeToo-inspired initiatives, gathering testimonies from women in Swedish higher education institutions. In her talk, Lisa Salmonsson will focus on how social media became an important space for organizing in the case of #akademiuppropet.

#MeToo: Thinking Ahead is the topic of the RIKK – Institute for Gender, Equality and Difference and Gender Equality Studies and Training (GEST) Programme conversation series in spring 2021. The series focuses on #MeToo, its gains as well as the challenges that remain in the fight against harassment, discrimination and violence. The series builds upon two recent books published on the movement, firstly an Icelandic issue of Fléttur, RIKK’s book series, and secondly The Routledge Handbook of the Politics of the #MeToo Movement, edited by Irma Erlingsdóttir, Director of RIKK and GEST, and Giti Chandra, Research Specialist at GEST.

The event will take place on Tuesday 4 May at 12.00-13.00 GMT. The sessions are held on Zoom (https://eu01web.zoom.us/j/63900680475) and will be live-streamed on Facebook. Recordings of the sessions will be made available on RIKK’s website and the Youtube-Channel of the School of Humanities.