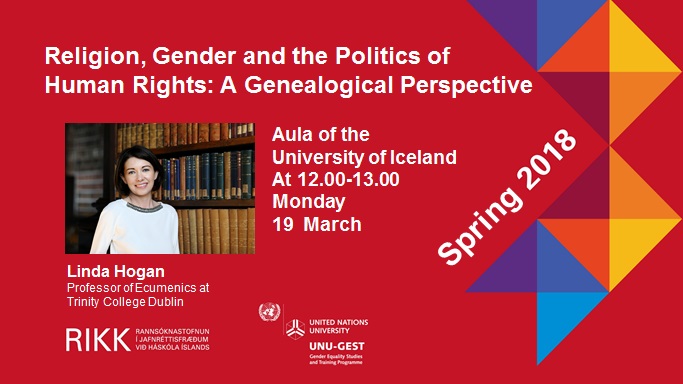 Religion, Gender and the Politics of Human Rights: A Genealogical Perspective 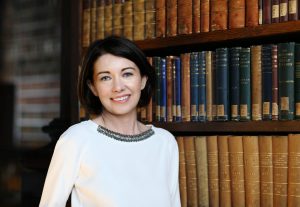 Prof. Linda Hogan is Professor of Ecumenics at Trinity College Dublin, is the sixth lecturer in the RIKK – Institute for Gender, Equality and Difference & UNU-GEST – United Nations University Gender Equality Studies and Training Programme – 2018 spring term lecture series. Her lecture is titled: „Religion, Gender and the Politics of Human Rights: A Genealogical Perspective“, and will take place on Monday, 19 of March, from 12.00-13.00, in the Aula, main building University of Iceland.

The relationship between religion and human rights is controversial and contested, and this is especially the case in relation to gender equality and women’s human rights. This lecture argues that religions can be an important ally in the promotion of women’s human rights, but only if a genealogical critique is brought to bear on religion. Such a critique will involve challenging essentialist understandings of culture, unitary accounts of community, and static portrayals of tradition.

Linda Hogan is Professor of Ecumenics at Trinity College Dublin and formerly Vice Provost of the college. Her teaching and research focusses on intercultural and interreligious ethics, gender and human rights. Her most recent book is Keeping Faith with Human Rights, Georgetown University Press, 2016.

The RIKK/UNU-GEST lecture series at the spring term 2018 are dedicated to the United Nation’s Universal Declaration of Human rights, but year 2018 marks its 70th anniversary. The declaration has emphasis on gender equality and women’s rights. The objective with the lecture series is to raise awareness of the value that human rights offer as a tool to tackle persistent gender disparities and address factors that perpetuate gender discrimination and inequality. The RIKK & UNU-GEST lecture series in the spring semester 2018 is held in collaboration with The National Museum of Iceland.

The lecture is in English, open to everyone and admission is free.